Listen To My Latest Podcast Episode:
Client Success Spotlight: How to Find a Niche that Pays Dividends with Sheri Fitts

3 Steps to Keep Momentum In Your Business 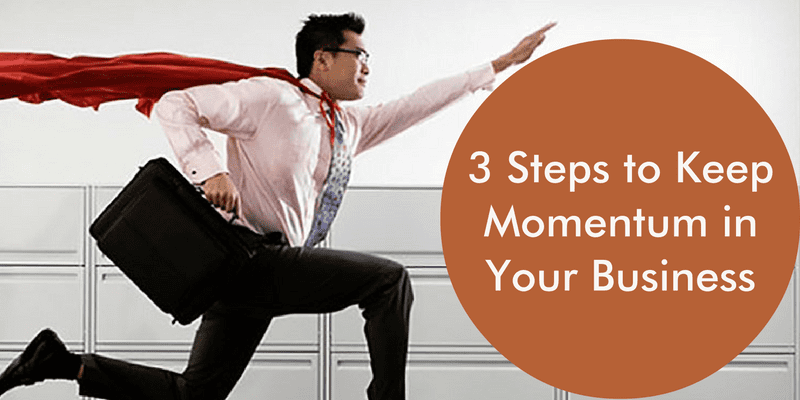 I always ask my clients to complete a 2-minute check-in form before we have our phone calls. Doing so helps them establish what has gone well since our last conversation, focuses our time together and determines what we will talk about during our coaching call.

Last week, one of my clients (let’s call him Bill) wrote something to the tune of “I cannot seem to build momentum, and I do not know what’s getting in the way.”

Bill is typically an overachiever, and when he puts his mind to something, it gets done quickly and well. Because of this, I was instantly wondering what was going on and what might be causing him to be ‘stuck.’

When we dove into it on the call, it turned out that there were parts of Bill’s strategy that he was not entirely on board with and had a hard time wrapping his head around. He was nervous, and perhaps a bit fearful, to move into new markets. Because of this, his marketing was not ready, and he had some website changes to make before he could launch. He was stuck and couldn’t move forward.

On our call, we talked through several of the changes that he needed to make to get ready for this launch. We focused on which specific markets to concentrate on and after getting clearer, Bill felt much more focused and ready to surge ahead.

Have you ever had a problem moving into a new idea because it was not quite right?

What I realized in Bill’s situation was this…

Indecision can often slow us down. Figure out what makes you uncomfortable with your new initiative, fix it and move forward boldly.

Let’s break it down into three simple steps:

1. Figure out what makes you uncomfortable with your new initiative.

Recognizing the problem is half the battle. If you find yourself slowing down or stuck, try to identify what is stopping you from moving into overdrive.

Take action to feel as confident as you possibly can in your new initiative. It might be making sure that the marketing is right. It might be practicing how you will talk to other people about your new idea (perhaps practice what you will say when you get a client on the phone).

NOTICE TO PERFECTIONISTS: As you have probably realized by now, nothing will ever be perfect. Go for 80%. Then hire others to tweak it to where you are comfortable. Just know that at some point, you need to let it go and get off the mark.

Once you have done #1 and #2, just go for it. Make the decision to move forward BOLDLY and don’t let anything slow you down.

#SpeakerSuccessTip: Have a Point of View – Even If It Means Some Might Not Love You!

One thing that happens to many public speakers as they start to grow and become more in demand and popular is they find that not everyone agrees with their philosophies or point of view. And guess what…that’s okay! Not everyone